Note: look at bottom of page to find out how to contact Kousk Eol (and possibly its crew…). Please note that the Iridium phone number is no longer available, since we arrived back in Toulon!

It is really unfortunate that our past lives have resulted in making non-French-speaking friends… But what may be even more unfortunate, for them, is that this blog is not going to be translated into English… No way…

However, in a remarkable effort to accomodate the linguistic deficiencies of those friends, and to give a proof of the incommensurable value we attribute to their friendship, if this was ever needed, we will try to provide some keys to decipher the contents of this blog, and give an opportunity to follow/react/participate to this sailing ramble.

Another possibility is of course to take proper French lessons…

But, do not expect this page to be updated on a regular basis!

Kousk Eol is a quite nice 45ft fast cruising sail boat from the Wauquiez shipyard, known for building elegant, fast and robust sail boats. Kousk Eol was acquired by André and Claude, 2 notorious WAFIs, early 2010, with the intention to go around the world. 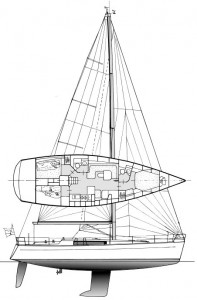 Kousk Eol means « sunset » in Breton, which is probably why we will go westward in our loop.

In the « Le voyage prévu«  section under the picture at the top of the page, you will find a map with previsional dates. The  arrows are the different legs of the voyage: they are numbered in sequence with dates. The red labels indicate the places where you do not want to be (even if a recognised WAFI) at particular times of the year, e.g. to avoid hurricanes and other similar joys.

You can look a the voyage we have done so far, whille seating on you prefered couch and drinking a nice cold beer, or any other illegal booze of your choice:

The route so far…

Make sure you installed Google Earth prior to clicking on the link. And don’t hesitate to play with zooming…

A lot of things still has to be done before the departure in June 2013:

Kousk Eol is (almost) ready… Not sure about the crew!

Departure is still June 30. A « pot »  will be organised on the pier at 11:00, just before the departure. All friends are invited!

September-November 15, 2013
Kousk Eol crosses equator, and arrives in Salvador de Bahia. Some sailing and mooring in various bays, until we hit the ground with the keel… Back to Salvador to repair…

December 1,  2013
Kousk Eol has arrived in Buenos Aires, after Salvador de Bahia and Rio de Janeiro!
And you can read Frank’s report, in English!

January 2014
We discover that the job done in Salvador was a mess: we need to get it re-done, in Piriapolis (Uruguay) this time: finally good people knowing their job! But we lost 1 month…

February 24, 2014
Kousk Eol rounds Cape Horn!  A(other) dream has come true…
Next stage is to go through the channels of Patagonia from Puerto Williams to Puerto Montt, via Punta Arenas. 1400 nautcal miles ahead of us…

May 2014
Kousk Eol has found a mooring in Puerto Montt, harbour North of Patagonia, for a little break, a consequence of the problems we had with our keel… Too late to cross Pacific and still have time to wander around the 1000’s of polynesian islands before the next hurricane season… We’ll do it next year!
A good excuse indeed: we are both glad to get some rest, after around 12 000 nautical miles since we left Toulon, and 1 400 nautical miles in Patagonia (understand: under cold strong winds and more than chilly heavy rains).

February 2015
Finally the two lazy sailors are back on their no longer lonely Kousk Eol. Around 10 days to get the boat ready for the next leg of our tour, and we leave Pueeto Montt, first to Valdivia (2 days cruise), then to the island of Robinson Crusoe (3 days). Totally unsuccessful in our search for Friday, we left for Arica (7 days), last city in Chile before Peru. Departure to the islands of Galapagos is planned March 26.

March 2015
After a few weeks in Arica, from where we visited Peru and a bit of Bolivia (Cusco, Arequipa, Machu Pichu, Titicaca, …), Frank joined us for the cruise to the Galapagos.
You can read here his report of the crossing.

April 2015
We spent about two weeks in the Galapagos: mixed feelings… Incredible islands and fauna. But VERY expensive! It seems that the local authorities have some kind of creativity contest to find new ways to tax saling visitors…

May 2015
16 days of crossing from Galapagos to Marquises Islands: quite fast! Three weeks visiting the archipelago: what a change after the Galapagos! Wild islands, very few people living there, extremely friendly.

June 2015
We are now in the Tuamotu atolls… Another great place on earth. Plan is to be in Papeete end of the month to meet with our wives…

August 2015
MarieJo and Cathy, our official room mates, came to visit. We took them to the Société islands (Moorea, Raiatea, Huahine, Tahaa, Bora Bora). This was extraordinary, but still not enough. So we took them to the Tuamotu, on the Tikehau atoll: a pure marvel… We spent 10 days there, and that was barely enough…
But it was time to get back to Papeete in time for their plane back to France. And for us to prepare the boat for the bad season: Kousk Eol will stay in Papeete while we go back home, until next year…

September 2015
Kousk Eol is now prepared for the bad season (hurricanes), in a marina in Papeete, While André and Claude are back in their respective families…
Next departure: early April 2016.

April 2016 – August 2016
The two brothers are back in Tahiti, where Kousk Eol was waiting: boat in good conditions. The « bad » season was not that bad: very -extremely!- wet, but wind below average. Firts stops in Raiatea, Bora Bora, then Suwarov, then the US Samoa, followed by the Samoa, then the Fidji, then Vanuatu to finay reach Noumea in the french New Caledonia. There, our wives MarieJo and Cathy joined us for a month in the surrounding islands and lagoons. Great time: tourisme, snorkelling, whale
watching, …

August 2016 – October 2016
Two friends joined us in Noumea. First stop was Port Moresby in Papua-New Guinea. Conditions were so rough that one of our friends decided to stop there and fy back to France… So we left at three for the Torres Straight, north of Australia. After a week, the second friend asked to be dropped in Darwin, where we had not planned to stop: conditions too rough again… This gave us an opportunity to test australian immigration procedures: almost four hours to go through, but very professional and polite people… So the two remaining crew, the two brothers, left two days later for Christmas island, real home of Santa Claus (don’t trust the Finns if they pretend otherwise), followed by Cocos islands (our last atoll for thsi trip). And then, the « morceau du chef »: the crossing of the Indian ocean. It did not fail in its reputation: strong winds and big waves. We were finally glad our friends had left before! We arrived in Maritius where we stayed two days, to be now in Saint Denis, on the Reunion island. Next phase will be to take some rest back home (and optionally check if someone still loves us there…).

November-December 2016
Jacques D and one of his friends join the board to cross from la Réunion to the coasts of South Africa: one of the toughest passages of this voyage. And it proved it: rough seas, bad weather, we had it all! And remember: the east coast of South Africa is where you find the Agulhas Current, raising waves up to 18 meters (measured)… But again, Kousk Eol is a fine vessel, and we reached Richard’s Bay safely, taking our time from there to go towards Cape Town. We arrived early december in Simon’s Town, just a few miles south of Cape Town, where a berth was waiting for us.

January-April 2017
After a trip back to France for the end-of-year celebrations, we came back. To start with a very nice trip in Namibia by car: worth it! Then early february, we had Kousk Eol on the ground for maintenance: change of the spray dodger, of the anti-fouling paint, repair of the propeller and change of the zincs, change a few lines (there is a rope factory in Cape Town where they sell ropes by the weight: the cheapest place round the world to get excellent new lines!).
Then, mid-february, we started our crossing of the South Atlantic Ocean, with stops in St Helena and Fernando de Noronha (look in the article -in french- for pictures). We then crossed the route we did more then three years ago, closing the loop. And a few days later, we crossed again the equator, before arriving in Martinique, where we will stay almost two months before getting back to France.

It is now time to cross the Atlantic back home… Very nice sailing, with stops in the Açores, then Gibraltar, the Baleares, to finally arrive in Toulon on the 1st of july 2017, where about fifty friends/family greated us…
It is now time to find other horizons for Kousk Eol!

Kousk Eol has an email address:

Use this address for regular, non urgent mail, or to send documents.Emails will be checked when arriving in harbours.

At sea, an Iridium phone should allow to maintain contact. Several options:

BTW, a WAFI is simply a Wind-Assisted Fucking Idiot.